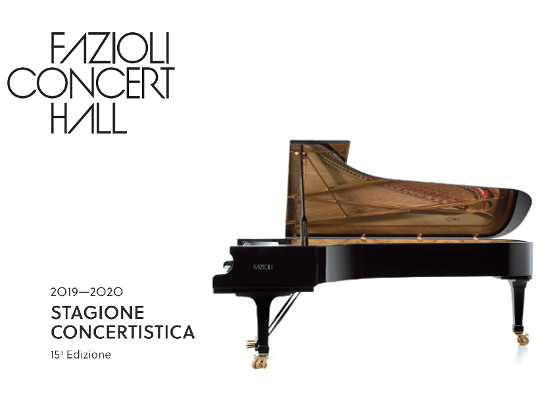 For this fifteenth edition, we approached the programme for our Concert Season with the same excitement that has marked this complex and emotional adventure right from the beginning. On one level, we feel great enthusiasm at the chance to truly create something so wonderful, offering piano enthusiasts the chance to enjoy new musicians and repertoires. Yet at the same time, there is a certain apprehension associated with guaranteeing the high quality that has allowed the Fazioli Concert Hall to quickly become a point of reference for such a wide audience, as well as a sought-after venue for pianists around the world.
It is unnecessary to explain again why, inevitably, our programme primarily features the piano as a solo instrument. Rather, we wish to focus on the reasons behind our choice of musicians, something that our more curious audience members are often keen to discover.

The curtain rises with a recital by the eminent Sa Chen, one of the most well-known names to emerge from China in recent years. Acclaimed for her distinctive and evocative interpretations, Sa Chen, following last year’s cancellation, will debut in Sacile on Friday 8th November, with a programme that represents her long and intimate relationship with the work of Chopin, and particularly his splendid Nocturnes.

Thirty-three-year-old Andrey Gugnin, (6th December) will also present one of the most well-loved “full” works of Chopin, his 24 Preludes, contrasting against Beethoven’s monumental Sonata Op. 106 “Hammerklavier” in the first half. We have been hoping to host the Russian pianist since 2016, when he stood atop the podium at the Sydney International Piano Competition of Australia.

Amongst those pianists who burst into a shining career through the world of competitions, we have been waiting a long time to present Luca Buratto to our audience; a virtuoso defined by critics as simply “extraordinary”. Winner of the 2015 edition of the Honens International Piano Competition in Calgary, on 7th February he will perform Mozart, Ravel and Brahms, along with work by the contemporary composer, Thomas Adès.

An enthralling musician and excellent communicator, philanthropist and tireless traveller, Hong Kong pianist Ernest So has an extremely refined, versatile and innovative relationship with his instrument. The programme that he has put together for 21st February, which celebrates living composers of the most varied backgrounds, vividly presents him as a true “global citizen”.

Boris Berman’s eclectic personality can be described as the epitome of the complete musician: a performer, distinguished teacher, far-sighted talent scout, inspired artistic director, writer and editor for musical publications. It is striking how many of his pupils become well-known names on the international concert circuit. Haydn and Schubert will be the ingredients of his sophisticated programme for 20th March.

In addition to Buratto, we will be hosting another example of truly excellent Italian pianism, with Mariangela Vacatello. She has seen over twenty years of huge success on the concert scene, able to instil great personality into every performance. There are few fellow Italians of her generation who can boast a similar collection of awards. She will return to Sacile on 3rd April to perform works by Skrjabin and Schumann.

The two chamber concerts are scheduled for the beginning and the end of our season.
The concert of 22nd November takes inspiration from the welcome input of artistic directors at the Premio Trio competition in Trieste. Trio Gaon, winner of the 18th edition and two special awards, has prepared a programme that is both elegant and engaging, with a solo role for outstanding pianist Tae-Hyung Kim.

Meanwhile, the concert of 17th April is the fruit of collaboration between Fazioli and the Le Dimore del Quartetto association. Quartetto Henao has been selected for us, and we have paired them with the eminent Austrian pianist Markus Schirmer, a performer with vast experience in chamber music. Here too, the programme will allow our audience to enjoy both the synergy between soloist and strings, and the piano and quartet individually.

Of the two jazz events that Controtempo and Fazioli have created together, one is dedicated to a great star and the other to a project for two pianos that will help classical-music lovers to approach the world of jazz. The 10th April will see the arrival at the Fazioli Concert Hall, for the first time as a solo pianist, of the great Stefano Bollani, who has already appeared on our stage with a trio at the beginnings of our season and of his career. Then, on Thursday 7th May, our audience will enjoy that special mix of jazz and classical music “that can only work if the artists are able to exchange roles, to share their respective worlds, and to translate their different languages into a common voice. Gloria Campaner and Leszek Możdżer will guide us on this journey.”

As usual, this finale will not really mark the end of the season, as again in 2020, we will continue with the young pianists recognised by prestigious international competitions. WINNERS (off-season concerts), in collaboration with the Regional Theatre Association of the Friuli Venezia Giulia region, has already proved that it is more than simply a “coda” on the fringe of the Fazioli Concert Hall Season, representing a series of concerts that arouses the curiosity of even the most demanding listeners.

And it is with such curiosity, beyond all else, that we wish all of our audiences to approach our programme, in the hope that we are able to fully satisfy them once again.