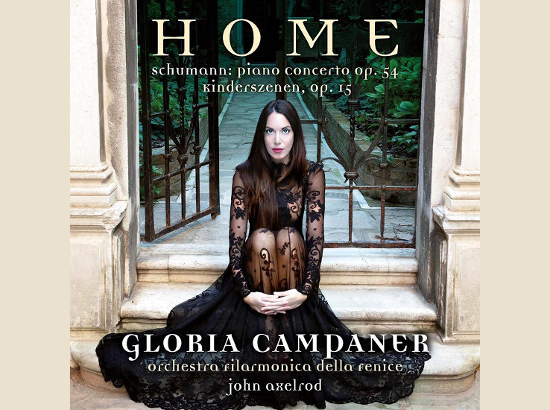 Warner Music Italy has released “HOME” by Gloria Campaner including the famous Kinderszenen and the Piano Concerto in A minor Op. 54 by Schumann, the latter recorded on the occasion of Gloria’s recent Debut at the prestigious Teatro La Fenice in Venice on a Fazioli concert grand, with the Orchestra Filarmonica della Fenice conducted by M° John Axelrod.

This is how the pianist describes her latest recording project: “In a way this album tells a story of my life, my dreams, my childhood scenes set in the Venetian inlands where I was born and grew up.  It had been always my dream to perform my favorite Schumann Piano Concerto in A minor at La Fenice Opera House, to be on that stage after being on the other side, in the audience where I used to sit as a child with my family.  So I decided to put my memories and wishes into this little ‘music box’ and everything that would remind me of my home: the orchestra I used to listen to; a Fazioli piano, built just a few kilometers away; a great conductor friend who just recently made his ‘home’ in Venice and two masterworks by my favorite composer Robert Schumann.”

The album is available for pre-orded on Amazon.